Calvin Finch: How to select and best grow shade trees in your San Antonio garden

Now is a good time to plant shade trees in San Antonio.

When you live in a climate like we do, shade trees are an important part of the landscape. Temperatures of 100-plus degrees are difficult to tolerate in the shade and are even more unpleasant if there is no shade.

Among the important issues to consider when selecting a shade tree species are its ultimate size, growth rate, appearance, drought tolerance, soil preference and susceptibility to pests and diseases. Quite often area gardeners remind me that we describe live oaks as “evergreen,” but they do, in fact, lose their leaves for a short time each March.

Live oaks are relatively slow-growing shade trees when compared to other choices, but they are held in high regard for their appearance, drought tolerance and longevity. If your landscape includes a 50-foot live oak, it may be 100 years old and is probably adding $30,000 to the value of the property.

A lot of attention is given to the live oaks susceptibility to the disease “oak wilt,” but it is recognized that the disease is relatively easy to detect and prevent if a homeowner does a limited amount of research and is alert to the situation with the trees in the surrounding neighborhood. One of the most effective ways to protect the value of live oaks and other shade trees is to establish a relationship with an arborist.

This week in the garden

It is prime time to plant your winter vegetable garden. Prepare the soil by incorporating 2 inches of compost into the planting area. Also enrich the soil with 10 cups of slow-release lawn fertilizer per 100 square feet of bed. Plant broccoli, cauliflower, cabbage, chard, kale and Brussels sprouts with transplants. Use seeds for carrots, beets, radishes, turnips and lettuce.

At special events and festivals around San Antonio the last few years, co-owner Gerardo De Anda of the popular Spanish restaurant Toro Kitchen + Bar has made no secret that the food of Mexico would be his next quest.

Tuesday, Oct. 6, that quest becomes a reality with the opening of Cuishe Cocina Mexicana in Stone Oak, just a few doors down from where he opened the first Toro in 2017. A second location of Cuishe is coming Nov. 3 in St. Paul Square near downtown, close to the second location of Toro, according to Cuishe’s Facebook page.

Named for an agave plant used to make mezcal, Cuishe (pronounced KWEE-sheh) will feature more than 150 bottles of spirits distilled from agave, including tequila, mezcal, sotol, raicilla and bacanora, served straight up or mixed in a wide variety of cocktails served not just in glasses, but also in clay cups, gourds and even hollowed-out jalapeños.

The elegant space is divided into rooms with rustic accents, such as Mexican vaquero gear and the farm implements used to harvest agave.

On ExpressNews.com: Review: A Spanish bullseye at Toro Kitchen in Stone Oak

Farmhouse Kitchen has revamped the 4,000-square-foot space at 1165 Merrill St., across from the Caltrain station, decking it out with opulent decorations (including handmade gold Thai chandeliers and flower wall), a private dining room, a lounge area with velvet chairs and gleaming full bar. The restaurant opened barely a week after San Mateo County announced that indoor dining could resume at 25% capacity or with 100 people, whichever is fewer. 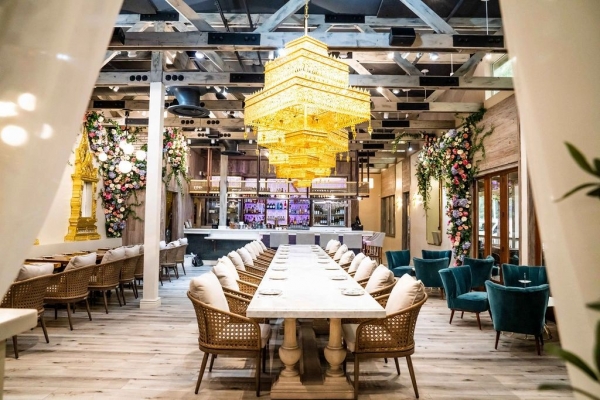 But the “new normal guidelines” for dining in at Farmhouse Kitchen includes a health screening, temperature check, masks required when diners aren’t eating or drinking and parties of no more than six people with reservations capped at 90 minutes. The restaurant also charges a $3 “COVID-19 sanitation fee” per table.

Kasem Saengsawang, a native of Thailand, opened his first Farmhouse Kitchen in San Francisco in 2015. The restaurant was inspired by the food he ate and cooked growing up in Loei, a rural province in northeast Thailand, but he spent much of his adult years in Bangkok.

Saengsawang now runs five restaurants, including one in Portland, Oregon. He recently moved to Menlo Park so plans to be a frequent presence at this location. 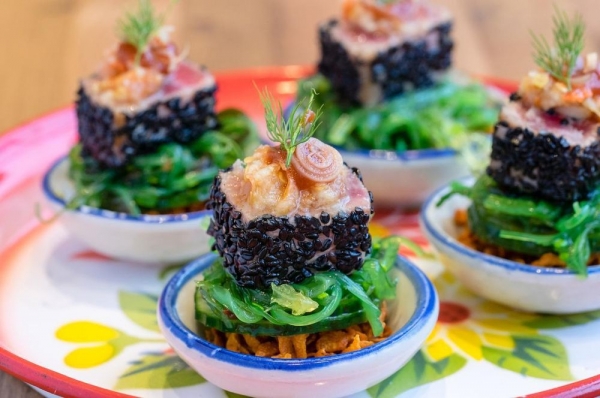 A 1921 home in San Francisco’s West Clay Park has been completely transformed for the 2020 San Francisco Decorator Showcase, and the kitchen may be our favorite part. Designed by the S.F.-based Regan Baker, the classic but dated kitchen got a Mediterranean-inspired upgrade with brass fixtures, a moss-gray range, and an array of art, and was completed entirely during quarantine.

The homeowners, who are actually Regan’s clients, were excited to participate in the showcase and loved the direction she’d planned. “The way they select the houses is a huge process,” she says. “They have to go through protocols and be okay with people coming in and doing whatever they want.” And though there is some feedback, the designers mainly get free rein to show off their talent.

Construction began in October 2019 and Feldman Architecture completed the entire demo in just three months. In January, designers were notified if they had received a space to decorate and had until May 31 to finish up.

“It was insane,” Regan recalls. “With COVID, we were completely shut down and had to finish it in two months. Because our area was construction-intensive, we were down to the wire.” But even though the process was quick and at times stressful, the kitchen is now one of the stars of the home.

The open kitchen revolves around a marble-topped island and connects with a family room hosting an office area.

The open kitchen revolves around a marble-topped island and connects with a family room hosting an office area.

Interior designer Benjamin Dhong had clear instructions from his client when it came to reimagining 3157 Steiner St. in Cow Hollow. His client, who hailed from Great Britain, wanted a chic, hotel-like ambience that would foster conversation and offer comfort.

“It’s sophisticated, fun and sexy,” said Dhong, principal of Benjamin Dhong Interiors. “It has a London hotel vibe and there’s a mix of modern and antique details.”

This philosophy is evidenced in the great room, which includes a kitchen island, dining area and family room.

Contemporary, monochromatic wallpaper adorns the foyer, giving it a feel akin to a hotel lobby. In addition to leading to public rooms, the foyer also steps into the home’s wine cellar.

High-end finishes abound in this bespoke, five-bedroom, four-and-a-half-bathroom residence whose interior was conceptualized by designer Benjamin Dhong. The entry level hosts a wine cellar, while the public