President Donald Trump, under pressure over his handling of the coronavirus outbreak and facing a key presidential debate Tuesday, announced the federal government would ship 150 million rapid tests to U.S. states for opening schools and ensuring safety at centers for senior citizens.

‘I say it all the time – we are rounding the corner,’ Trump said as the nation continued to face staggering losses and infections from COVID-19.

‘This will be more than double the number of tests already performed,’ he said, announcing the plan in the White House Rose Garden. 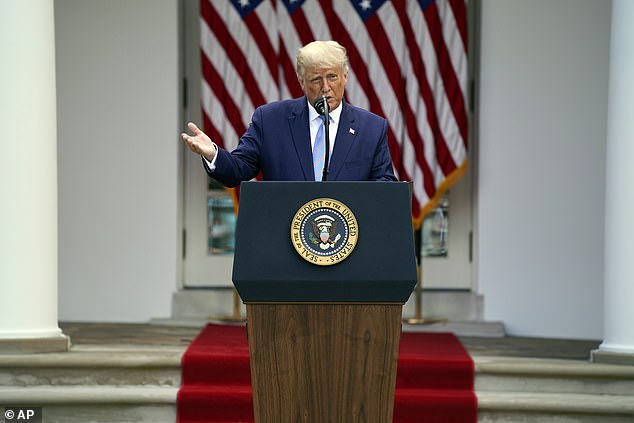 ‘I say it all the time – we are rounding the corner,’ President Trump said Monday regarding the coronavirus

Trump congratulated his team and once again said the situation was improving, even as the nation passed 200,000 coronavirus deaths. And he repeated his call to ‘reopen’ states.

‘We have too many states right now that are locked down,’ Trump complained. ‘Nobody knows what the governors are doing actually,’ he said.

He vowed: ‘We will defeat the virus and end the pandemic and next year will be one of the greatest years in our history.

His words came as top infectious disease expert Dr. Anthony Fauci openly criticized the decision by Florida Gov. Ron DeSantis, a Trump loyalist, to reopen bars, restaurants and other business in his state at 100 per cent capacity. 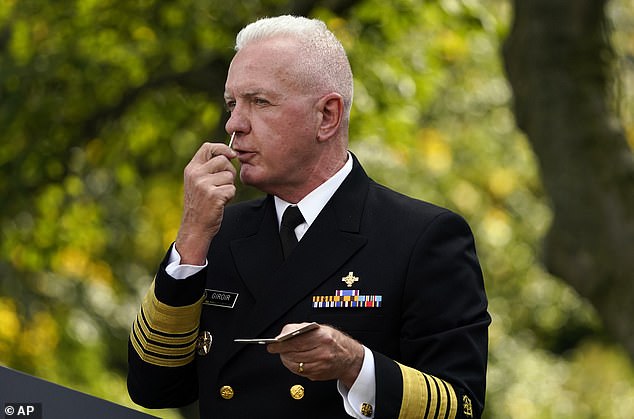 Adm. Brett Giroir, assistant secretary of Health and Human Services, swabs his nose as he demonstrates a new rapid result COVID-19 test during a event with President Donald Trump about coronavirus testing in the Rose Garden of the White House, Monday, Sept. 28, 2020, in Washington 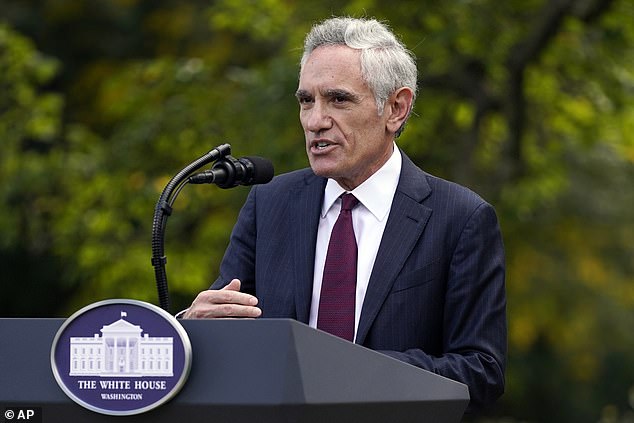 White House coronavirus adviser Dr. Scott Atlas speaks during an event with President Donald Trump about coronavirus testing in the Rose Garden of the White House, Monday, Sept. 28, 2020, in Washington

Fauci told ABC’s ‘Good Morning America’ Monday: ”Well that is very concerning to me, I mean, we have always said that, myself and Dr. Deborah Birx, who is the coordinator of the task force, that that is something we really need to be careful about, because when you’re dealing with community spread, and you have the kind of congregate setting where people get together, particularly without masks, you’re really asking for trouble. Now’s the time actually to double down a bit, and I don’t mean close,’ he said.

In a bid to demonstrate just how quickly the tests can go – after months when experts complained about a lack of sufficient tests – Assistant Secretary for Health Admiral Brett Giroir swabbed his own nose at the live event.

‘It’s in 15 mins, the result,’ he said, as he conducted the Abbott test, which requires inserting a swab into the lower part of the nasal passage.

‘I will demonstrate a self swab for you, to show you just exactly how easy the test is performed.  Literally it almost could not be easier,’ he said.

He proceeded to place six drops of liquid onto a sheet of paper. He made a circulation motion five times inside each nostril and placed the swab into the test kit.

‘This is not the deep brain biopsy that we talk about, he quipped, referring to other tests that require a swab deep in the nasal passage.

After sealing it up, ‘Then you wait 15 minutes. And that is the test.’

He said it can be supervised by a medical professional or done at home in a pinch.

He said 100 million tests would be given to states and territories to ‘support efforts to reopen their economies and schools immediately and (as) fast as they can.’

‘The support my administration is providing would allow every state on a very regular basis test every teacher who needs it,’ he said.

Trump said 6.5 million tests will go out this week and the rest in coming weeks.

Trump is trying to show progress in the battle against the pandemic as he campaigns for re-election on Nov. 3 against Democrat Joe Biden. The first presidential debate will be held on Tuesday night in Cleveland, Ohio.

The rapid tests announced by Trump were purchased from Abbott Laboratories in August for sending to governors of states and territories to support school reopenings and other critical tasks.

Abbott has said it would scale production capacity to 50 million tests per month by October and that it could currently produce ‘tens of millions’ of the tests, indicating it will take at least a few months for the tests to be fully distributed to states and territories.

At the Rose Garden event leader of the Trump coronavirus task force, Admiral Brett Giroir, demonstrated how to conduct the Abbott rapid test, swabbing his nasal passages and dipping the swab into a test solution that will provide a result in about 15 minutes. (Reporting By Steve Holland and Carl O’Donnell; Editing by Bernadette Baum and David Gregorio)