Two naughty toddlers were caught in the act after unleashing a paint tsunami – covering the entire kitchen and drenching themselves head-to-toe in paint.

Hayley Kidd, 27, from Knaresborough, North Yorkshire, had been giving the kitchen revamp on Monday while her children Bonnie, four, and Harry, one, played outside in the garden.

She nipped upstairs to use the toilet while the children were occupied, but when she returned less than five minutes later, the two youngsters had smeared a tub of white paint all over themselves and the entire kitchen including the floor, cupboards and surfaces.

Hayley explained that she had left the paint on the kitchen side but Bonnie had climbed onto the surface and used a ladle to throw paint around the room and at her younger brother.

Bonnie, four, and Harry, one, were caught unleashing a paint tsunami in their kitchen which cost their mother £500 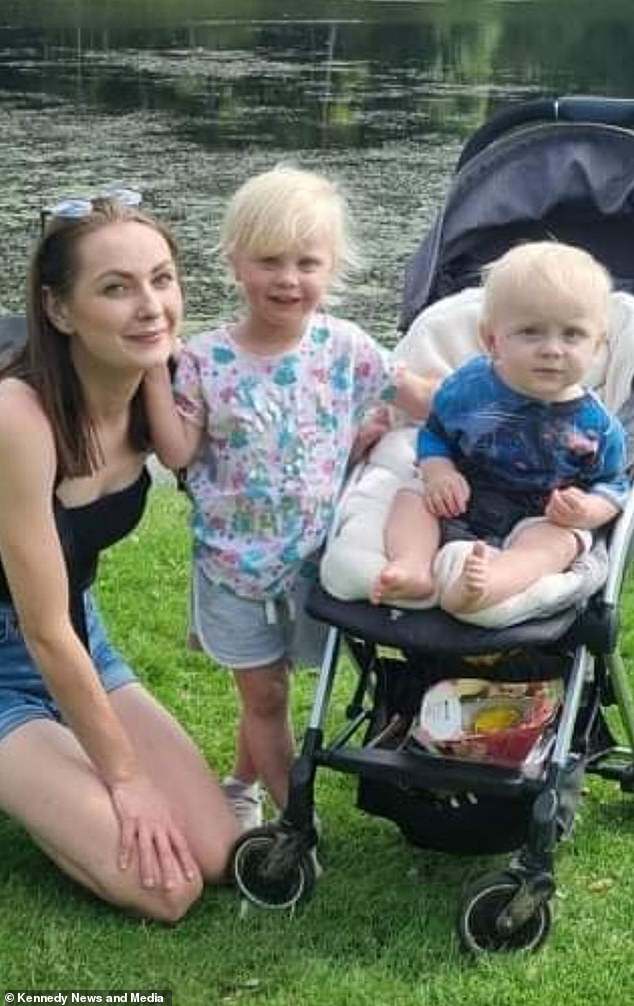 Hayley tries to do gentle parenting so she took a big breath when it happened. Bonnie asked if she was cross and she replied that she ‘Wasn’t happy with them but it’s done now.’ 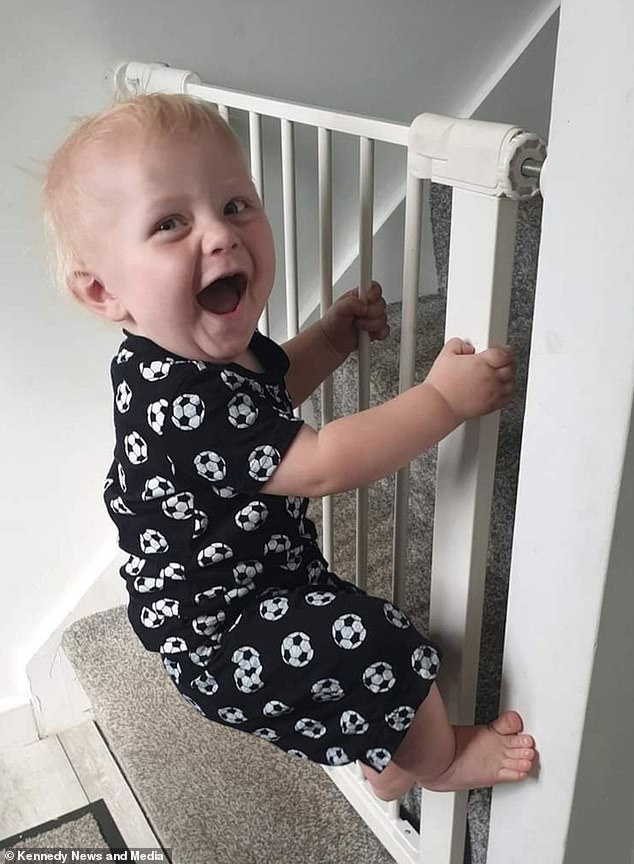 A hilarious photo captures the tots caught in the act, with Bonnie crouched over the exploded bucket, both dripping in white paint that also covers every surface and has left the floor a sea of white.

The escapade is estimated to have cost Hayley at least £500 because she says she needs to replace the oven, air fryer, microwave and even plug sockets, which have been faulty since their encounter with the paint.

Hayley said: ‘It’s quite possibly the worst day of my life, but it was funny and it’s done now. There’s always something in our house.

‘I started painting my kitchen and the children were playing outside in the garden. While they were playing, I thought I’d run upstairs. So I went to the toilet, then I spotted a pile of washing on the stairs so I picked that up and put it on my bed. 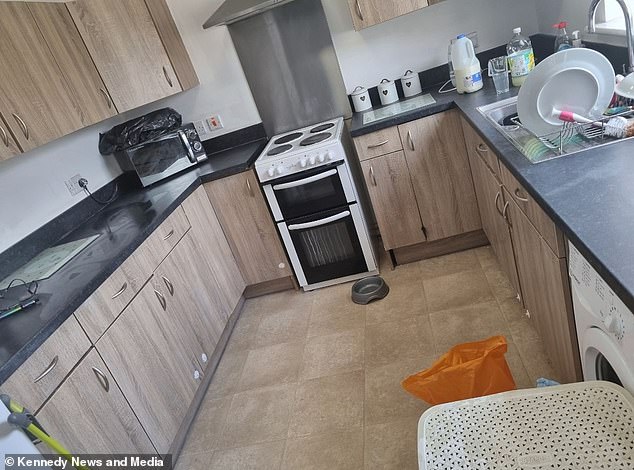 The kitchen after Hayley spent hours cleaning up the paint. Hayley now needs to replace the oven, air fryer, microwave and even plug sockets, which have been faulty since their encounter with the paint

‘I can’t describe how quickly it happened. It was less than five minutes. I came down and I was faced with that.

‘I had no words, there was a moment of pause and silence while I took it in. Bonnie had pulled a ladle out of the drawer and was swinging it around and throwing it to the other side of the room at my other child which is why he was covered in it.

‘They saw my presence and were like ‘oh no, we’re in trouble’. I just asked them what they’d done and she said she was sorry.

‘I try to do gentle parenting so I took a big breath. Bonnie asked if I was mad and I just said I wasn’t happy with them but it’s done now.’ 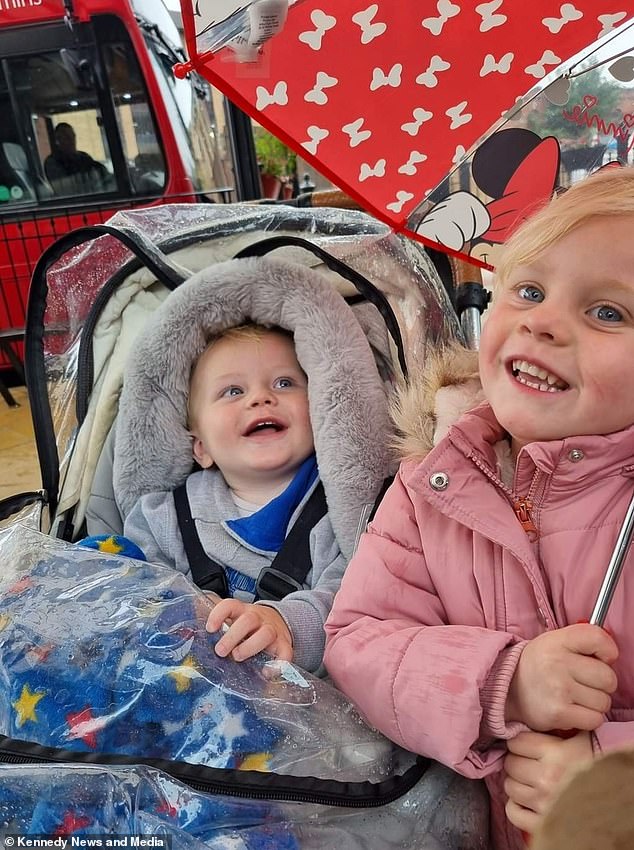 Cheeky duo! Bonnie, four, and Harry, one, from Knaresborough, who unleashed a paint tsunami in their kitchen

The nursery teacher rushed the children upstairs for a shower before using cereal boxes to scrape the paint away and she ended up spending 12 hours trying to clean up the mess.

Although she managed to salvage most of the kitchen, Hayley will need to replace the microwave, oven and air fryer, which are all too damaged by the paint.

Hayley said: ‘I just got them upstairs in the shower so I dripped more paint everywhere on the way. I showered them down which was a traumatic experience for them when I was trying to get the paint off.

‘Harry doesn’t sleep without me so I had to lay there for one hour while the paint was drying and I just had to go down and my brother had already started cleaning for me. 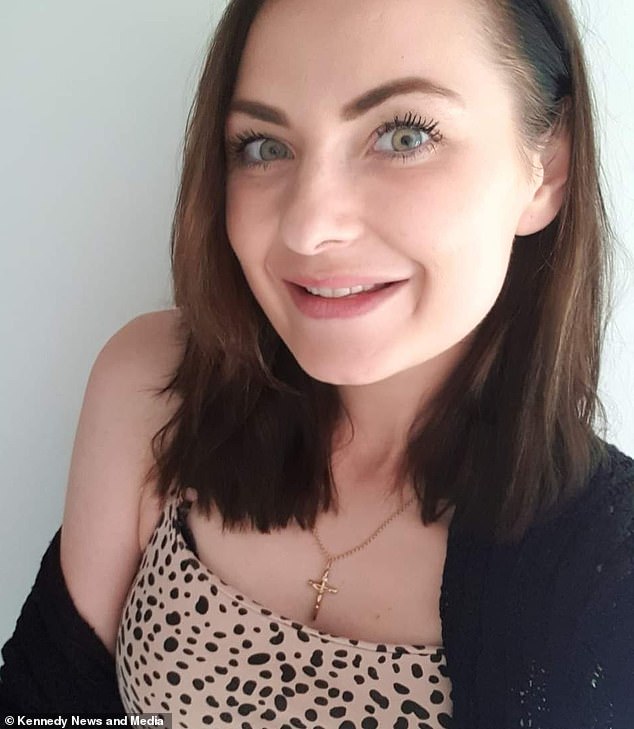 ‘We had to use cereal boxes to scrape it up. I ended up having to take Harry to bed and deal with it in the morning. I was cleaning from about 6am until 6pm.

‘I’ve managed to get most of it up but there are drips that look awful. There’s still paint in some places I can’t get it out of. I need to replace the microwave, the oven, the air fryer and the plug sockets keep tripping.’

Hayley shared a photo of the toddlers smeared in paint on social media and commenters urged her to bin Bonnie and Harry and buy a new house.

The post has racked up more than 3,000 likes, shares and comments.

One commenter said: ‘Hahaha. Oh Hayley. My god, children at their finest. Honestly you have the chill of a Saint. I’d have stuck both mine in the paint and binned the lot.’ 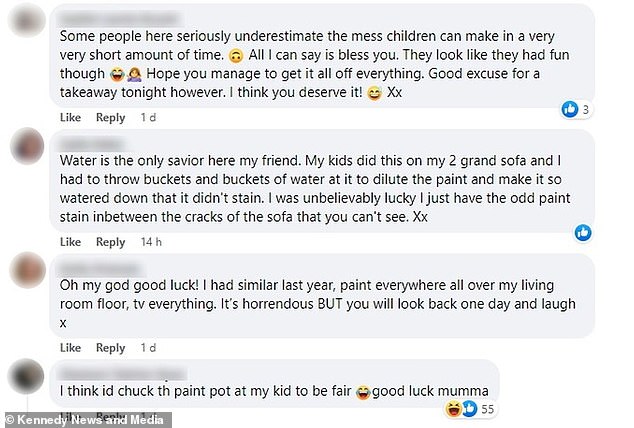 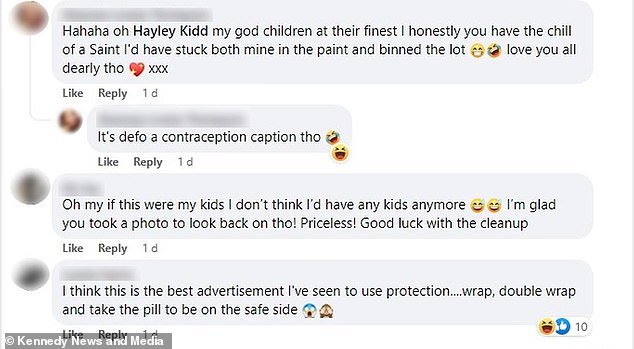 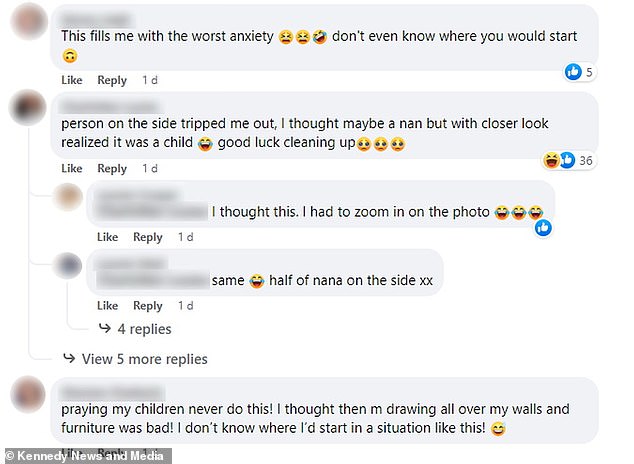 Another said: ‘I think if my kids did this, I’d finally have to section myself. I can’t even begin to imagine what went through your head walking in to this. I’d probably scream the house down.’

Hayley said: ‘I thought I was going to get stick for leaving the paint out but people found it funny because so many people can relate.

‘I was gone for literally a few minutes. I’ve learned my lesson, I know what kids are capable of in such a short space of time.

‘Some people were saying they’d put their kids in the bin or bury them in the garden and some said to just burn the house down and buy a new one. It made light of the situation because I was checking in and out throughout the day.