There’s long been speculation about where First Lady Melania Trump’s allegiances lie. During the last four years, she’s mostly kept quiet, other than an ill-advised “Be Best” initiative to combat cyberbullying and trip to an immigrant children’s shelter on the Texas/Mexico border where she wore a jacket that read, “I really don’t care. Do U?” on the back.

On Thursday, new insight into her behind-the-scenes beliefs emerged with the release of audio secretly recorded by her former aide and friend, Stephanie Winston Wolkoff. Wolkoff left the White House in 2018 after it was revealed her firm reportedly made $26 million off the planning of Trump’s inauguration, per the New York Times. In the summer of 2018, after Wolkoff had exited her East Wing role, she secretly taped Trump expressing disillusionment with several aspects of her life at the White House. “They say I’m complicit. I’m the same like him, I support him. I don’t say enough I don’t do enough where I am,” Trump said of criticism she received due to her husband’s separation of migrant children at the border. The First Lady added, “I’m working my ass off on the Christmas stuff, that you know, who gives a fuck about the Christmas stuff and decorations? But I need to do it, right?”

When Wolkoff confirmed she would have to carry out her yuletide duties, Trump continued, “Okay, and then I do it and I say that I’m working on Christmas and planning for the Christmas and they said, ‘Oh, what about the children that they were separated?’ Give me a fucking break. Where they were saying anything

President Donald Trump and his wife Melania have tested positive for Covid-19, throwing the country’s leadership and the 2020 election into uncharted territory.

Here’s what we know so far.

President Trump and his wife Melania test positive for coronavirus

President Donald Trump announced just before 1 a.m. ET that he and first lady Melania Trump tested positive for the coronavirus.

“Tonight, @FLOTUS and I tested positive for COVID-19. We will begin our quarantine and recovery process immediately. We will get through this TOGETHER!” Trump tweeted.

The White House physician, Sean Conley, released a letter about Trump’s diagnosis, saying, “The President and First Lady are both well at this time, and they plan to remain at home within the White House during their convalescence.”

The announcement immediately throws into question the nature of the remaining 32 days of the campaign, including the last two presidential debates. The next one is scheduled for Oct. 15 in Miami.

The news came shortly after the president said he and the first lady were in the “quarantine process” following senior aide Hope Hicks’ positive test Thursday.

While the news that the president had tested positive for Covid-19 came as a jolt — medical experts said it shouldn’t have.

In recent weeks, Trump, 74, has held mass gatherings, some indoors, and shunned mask use while claiming the end of the virus was just around the corner.

In turn, his staff, his family members, and his supporters have followed his lead. As recently as Tuesday evening at the first presidential debate, Trump family members and other members of the administration did not wear masks inside the hall, despite a rule

President Donald Trump said early Friday that he and first lady Melania Trump have tested positive for the coronavirus. (Oct. 2)

Hicks tested positive for the coronavirus after she traveled with Trump in the last few days, according to a person familiar with Hicks’ situation.

Trump tweeted that he and the first lady “will begin our quarantine and recovery process immediately.”

Hicks is frequently in contact with the president and was with Trump as he traveled to and from the first presidential debate in Cleveland on Tuesday.

Hope Hicks, who has been working so hard without even taking a small break, has just tested positive for Covid 19. Terrible! The First Lady and I are waiting for our test results. In the meantime, we will begin our quarantine process!

She appears in a photo deplaning upon arrival in Cleveland, not wearing a protective face mask. Hicks also traveled aboard Marine One, the presidential helicopter, for a Minnesota rally Wednesday.

Trump said in a Thursday night interview on Fox News that he had just taken a coronavirus test and that he and the first lady “spend a lot of time with Hope, and others.” 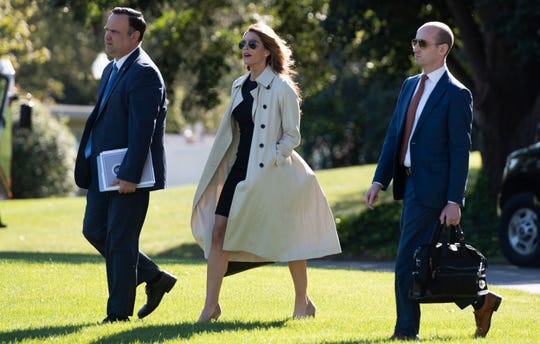 Bloomberg reported that Hicks was experiencing some symptoms associated with the coronavirus, according