Here Is What the 2021 Genesis G80 Interior Has to Offer

By [email protected]_84 7 months ago
The luxury brand’s newest mid-sized sedan is a piece of art in terms of design and technology. The exterior of the G80 stands out with a huge but refined front grille, innovative headlights, ingeniously incorporated turn signals and the right amount of chrome trims.

The interior is just as gorgeous and ingeniously designed, leaping the brand into a new era of luxury and connectivity between driver and technology.

Based on the “Beauty of White Space” concept inspired by traditional Korean architecture, it focuses on the careful balance of personal-space and technology, doing an excellent job of looking simple and spacious, yet technologically capable. 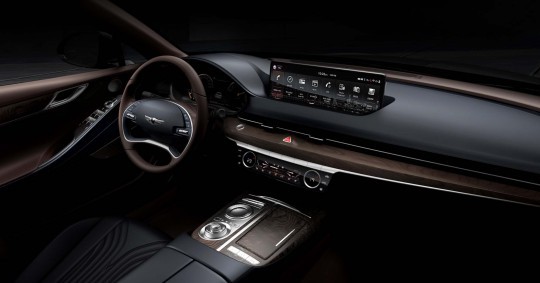 Right from the start, as you put your smartphone in the vicinity of the car’s door handle to unlock it, you realize that this is a premium vehicle. The Genesis Digital Key system allows for keyless entry and easy access for up to three individual users.

Open the door and you will be greeted by the elegant cabin. There are only two interior color options available for preorder, customers can choose between an all-black or an Anthracite Beige leather interior, but like the preview images show, other color combinations will surely be available.

The 12-way Power Front Seats are made of a combination of leather accents and leatherette seating surfaces and feature 4-way lumbar support adjustments, an integrated memory system with 2 settings and the Smart Seat Posture system.

The driver can enjoy the Ergo Motion Driver’s Seat which integrates seven air cells that perfect seating position according to the selected driving mode.

The ergonomic steering wheel does not have a revolutionary shape, but its design is sharp and blends with the rest of the interior beautifully. By dividing it into upper and lower halves, Genesis designers give the driver a better view of the 12.3-inch 3D

The White House on Saturday sent conflicting signals about the president’s battle with the coronavirus, raising questions over the seriousness of his illness.

Doctors Saturday afternoon offered a rosey assessment of Trump’s health less than 24 hours after he was checked into Walter Reed Medical Center in Bethesda, Md.

Adding to the confusion, the doctors themselves sent mixed messages over basic facts about the president’s treatment.

Friday afternoon, the president was taken via Marine One to Walter Reed “out of an abundance of caution” according to White House press secretary Kayleigh McEnany. The president was seen on camera walking out of the White House in a suit, blue tie and mask, where he waved to the press and boarded Maine One.

At the time, White House physician Sean Conley released an update stating that the president was experiencing fatigue.

But on Saturday, the White House staff and physicians began issuing mixed messages.

The Treasury is increasing the amount of money it would support for a new coronavirus spending bill as it continues to negotiate with Democrats, Roll Call reported Wednesday night.

The increased offer is said to include more money for education and state and local governments than before.

Pelosi and Mnuchin met for 90 minutes without striking a deal. But after, both seemed hopeful of continuing negotiations and reaching some kind of agreement.

One issue that is not in question: Both sides have said they support another round of $1,200 direct payments to Americans.

This week has been the first major negotiation on more federal spending to address the economic effects of the coronavirus pandemic since talks most recently collapsed in August.

The parties have been trying to find common ground, with Democrats

The two have negotiated extensively this year on economic relief bills. They initially found success but have been at odds in recent months, and talks have repeatedly broken down. They are running out of time to reach an agreement before the November election, but their planned talks this week appear to be their most extensive engagement in more than a month.

Democrats described their new offer as an updated version of the $3.4 trillion Heroes Act the House passed in May, which the White House and Senate Republicans dismissed as far too costly. Senate Republicans and Mnuchin have also said $2.2 trillion is too much to spend, but Mnuchin has said he is open to negotiations. It was not immediately clear whether the talks would bear fruit or whether Democratic leaders would use the bill to provide political cover for moderate House Democrats, who have grown increasingly anxious over Congress’s recent inaction on pandemic relief legislation.

As the pandemic worsened earlier this year and many businesses shut down, Congress passed four bipartisan bills in March and April that pumped close to $3 trillion into the economy. But they have not passed an economic relief law since then. Talks involving Mnuchin and Pelosi collapsed in early August and, before now, had shown little sign of reviving.

Mnuchin has said his priorities in a new round of spending would be aid for small businesses and children, among others. He has also talked about providing more assistance to the airline industry and approving another round of stimulus checks. There is some overlap in the White House’s goals with the things Democrats included in their new bill.

For example, the Democrats’ bill would extend the $32 billion payroll support program for the airline industry, which is scheduled to expire on Sept. 30, threatening tens