President Trump is expected to make his first in-person address Saturday since his COVID-19 diagnosis, speaking from the South Lawn balcony about “law and order” in an event coordinated with Candace Owens’ Blexit group, a senior White House aide said.

The president is holding the event despite the nomination ceremony for Amy Coney Barrett that Dr. Anthony Fauci described as a “superspreader” event. Multiple top White House officials, including the president, fell ill after the event.

ABC News first reported the Saturday event. The New York Times says hundreds of people are expected to gather on the South Lawn.

It is unclear whether the president will be negative for COVID-19 by Saturday, but he’s expected to keep his distance from the balcony. The White House said he tested positive on October 1, which would make Saturday 10 days since his diagnosis and the first possible date he could be in public.

First lady Melania Trump is also recovering from the virus. Mr. Trump is expected to return to the campaign trail on Monday, when he heads to Florida for a Make America Great Again event.

The president has made misleading claims about the virus since he was hospitalized, including that the treatment he took is a form of a “cure” for coronavirus. There is currently no cure for the virus.

Owens’ Blexit is about helping Black voters exit the Democratic Party and moving them towards the Republican Party.

“We had a super spreader event in the White House and it was in a situation where people were crowded together, were not wearing masks. So the data speak for themselves,” Fauci told CBS News Radio host Steven Portnoy.

Fauci is the longtime director of the National Institute of Allergy and Infectious Diseases.

White House staff rarely used masks before the recent outbreak because aides close to Trump are regularly tested for COVID-19. Many outside guests at the Barrett celebration also were unmasked and there were reportedly indoor gatherings after the event.

The White House transitioned to a new rapid-results test shortly before the event.

A significant number of attendees of the Rose Garden ceremony later tested positive for COVID-19, including Trump, who is recuperating at the White House after three nights in the hospital.

Sen. Mike Lee (R-Utah), who did not wear a mask, and Sen. Thom Tillis (R-NC), who did wear a mask, both revealed they had the virus, as did a third GOP senator, Ron Johnson of Wisconsin, who was not at the event.

Dr. Anthony Fauci said in an interview with CBS News that referring to a cure for COVID-19 may cause “confusion,” and he also weighed in on the health status of President Trump, who contracted the virus but is eager to return to in-person events as the presidential campaign reaches its closing weeks. Fauci also identified the White House ceremony for Supreme Court nominee Amy Coney Barrett as a “super spreader” event.

Fauci, director of the National institute of Allergy and Infectious Diseases, was asked by CBS News’ Steven Portnoy about Mr. Trump’s penchant in recent media appearances for referring to the treatment he received for COVID-19 as a “cure.” Portnoy, CBS News’ White House radio correspondent, observed that until recently, most of the president’s aides have not worn masks, and he asked what people can learn about the efficacy of that strategy in preventing the spread of COVID-19.

“I think the — the data speaks for themselves,” Fauci said of mask-wearing. “We had a super-spreader event in the White House and it was in a situation where people were crowded together and were not wearing masks. So the data speak for themselves.”

A number of Trump aides and allies who attended the nomination ceremony for Judge Amy Coney Barrett in September have since tested positive for COVID-19.

And talk of a “cure” is inaccurate, Fauci suggested, since there currently is no cure for COVID-19 — only therapeutics.

“We don’t have any indication — I think you really have to depend on what you mean by a ‘cure,’ because that’s a word that leads to a lot of confusion,” Fauci said. “We have good treatments for people with advanced disease who are in the hospital.”

Turning to the president’s health, the infectious diseases expert did not think that the fact that

By [email protected]_84 10 months ago
That’s exactly the definition nearly everyone gives to this vessel the moment they set eyes upon it. Just so we’re on the same page this luxury yacht is known as the Metis 63 by Benetti. Oh, you don’t know who they are? Not a problem. They’ve been building sea-faring vessels of any kind since 1873, so you know they mean business.

But for the Metis, Benetti worked with world renowned Bannenberg and Rowell Design. If you remember them from the Predator yacht, great. If you don’t, they’re known as the yachting worlds best known secret. The vessels they work one, will always remain a one of a kind. They will be the point of focus for when we discuss the interior.

That ‘63’ in Metis 63 stands for the length of this vessel’s steel hull, a full 63 meters or 206.6 feet. And like most other seafarers it includes an aluminum superstructure. This allows the designers to create a number of decks and sleek exterior paneling. 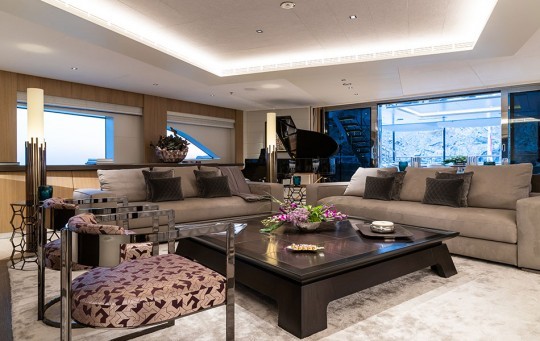 As With most modern-day yachts, this one too uses a white and black color scheme. To bring a bit of balance to the mix, the use of metals and woods help set a soft tone to the ship. The large amount of hull integrated windows let you know that this vessel is ready with quite the number sleeping quarters. Up to 13 guests can lay their heads upon those Bannenberg pillows in seven cabins.

To make this designer machine move along the seven seas we will be able to find two MTU diesel engines that put out a total of 3702 HP. It’s enough to keep it cruising at 12 knots with a top speed of 16.

Now on the inside, this ship really shows off what level of comfort and style you

© Provided by The Independent

At least 11 people  have tested positive for coronavirus since attending a Rose Garden ceremony on 26 September to celebrate the nomination of Judge Amy Coney Barrett to the Supreme Court, including the president, but the White House is not contact tracing the event, according to the New York Times.

Instead, the White House has confined its tracing efforts to those who came into close contact with the president in the two days before his diagnosis last Thursday. That leaves out the numerous people who attended  the ceremony at the White House, many of whom weren’t wearing masks  or social distancing.  The tracing effort has also been conducted largely by email, rather than with the rigorous phone interviews public health departments usually use.

An internal Centres for Disease Control and Protection (CDC) email the New York Times viewed shows a team of agency scientists prepared to go to Washington and assist with tracing after the president’s positive diagnosis, but a call for their help never came.

Judd Deere, a White House spokesman, said a “robust contact tracing programme” is in place, including full contact tracing for a New Jersey fundraiser Mr Trump held just before he tested positive, and that these efforts continue with the help of “CDC integration”. Two senior CDC scientists told the paper they weren’t aware of the role Mr Deere was describing for the public health watchdog.

The president left Walter Reed Medical Centre on Monday and tweeted, “Don’t be afraid of Covid.”