But on Tuesday, in a letter spearheaded by Rep. John Ray Clemmons, D-Nashville, half of the House Democratic Caucus requested from Comptroller Justin Wilson an audit of their own: looking at the Lee administration’s spending of federal coronavirus funds.

In addition to billions of other dollars in earmarked COVID-19 stimulus funds, Tennessee received $2.3 billion in from the federal Coronavirus Relief Fund, which allows states and some cities broad flexibility in how the money is spent. 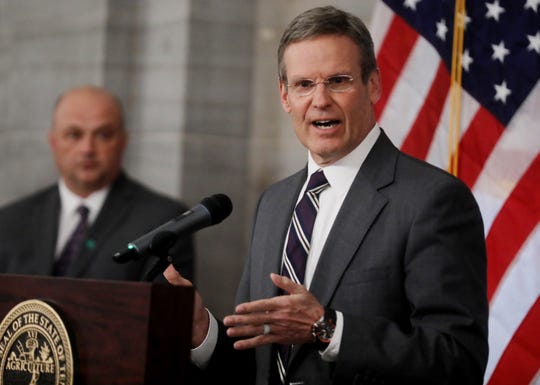 Gov. Bill Lee speaks at a press conference in the Old Supreme Court Chamber in the Tennessee State Capitol Monday, March 16, 2020, in Nashville, Tenn. (Photo: Alan Poizner / For The Tennessean)

He cited the administration’s award of a $1.2 million annual contract with ClassWallet. Awarded before the pandemic, the agreement with the Florida-based company was reached outside of the state’s established procurement process. The state hired the company to administer Tennessee’s education savings account program.

Clemmons then referenced tens of millions of dollars in expenditures using coronavirus relief funds, including more than $8 million in a no-bid contract to North Carolina-based sock company Renfro. Tennessee hired the company to produce 5 million masks that would be distributed to citizens.

He listed other contracts for personal protective equipment that have raised eyebrows as well, including one with a furniture company owned by state Rep. Jerry Sexton, R-Bean Station, previously reported by NewsChannel 5.

“Fair questions about political connections and favoritism to supporters have been raised about the reasons for Gov. Lee’s highly suspect business dealings on behalf of our state,” Clemmons wrote. “Whether Governor Bill Lee is simply guilty of fiscal mismanagement and/or administrative incompetence or whether he has abused his broad emergency powers to enrich political allies and donors with no-bid state contracts are questions worthy of investigation.

“At the very least, the people of Tennessee deserve to know how, where, and why their hard-earned tax dollars were spent and to whom they were paid.”

Under Tennessee’s state of emergency, which has been in effect due to the pandemic since March, Lee by law has been authorized to make purchases without following the usual bidding process.

The governor has defended the state’s use of the emergency, no-bid procurement process, saying the state needed to make recent purchases quickly.

His office did not immediately respond to a request about the Democrats’ call for an audit of spending.

Lee is expected to announce later Tuesday whether he will extend the state of emergency, which grants him wider-than-usual executive authority. Lee and has faced scrutiny even from Republicans in recent months over the constitutionality of his emergency powers.

Want to read more stories like this? A subscription to one of our Tennessee publications gets you unlimited access to all the latest politics news, podcasts like Grand Divisions, plus newsletters, a personalized mobile experience and the ability to tap into stories, photos and videos from throughout the USA TODAY Network’s 261 daily sites.